05.10.2017
Architecture Articles
Finland has been a forerunner of gender equality in architecture education: the first woman graduated as architect in Helsinki already in the 19th century. Pirkko-Liisa Schulman, Chair of Architecta, talks about the birth of the association and its activities since 1942. The article has been published in the Finnish Architectural Review 2/2017.In celebration of its 75 year jubilee Architecta organises a seminar at Laituri in Helsinki on 7 October, 2017 at 12:00–15:00. The keynote speaker is Peggy Deamer, Assistant Dean and Professor of Architecture at Yale University. More information about the event may be found here (in Finnish).The Finn, Signe Hornborg (1862–1916), was probably the first woman in Europe to graduate as an architect. She studied by special permission at the Polytechnic Institute of Helsinki, completing her degree in 1890. She was later followed by Inez Holming, Signe Lagerborg, Bertha Enwald, Wivi Lönn and Albertina Östman. By the time the Polytechnic Institute became a university in 1908, eighteen women had already graduated as architects under its auspices, while some others had to abandon their studies due to getting married. In 1930, nearly one third of the members of the Finnish Association of Architects were women. By comparison internationally, this was highly unusual.

Wivi Lönn (1872–1966) was the first woman to establish and run her own architectural office in Finland. She was a productive and innovative architect who designed a number of major public buildings, particularly schools. She was commissioned to design the Finnish Girls’ School (1902) in Tampere two years after her graduation. Lönn succeeded well in architectural competitions from the early stages of her career onwards, and designed a number of notable buildings in Tampere, such as the Alexander School (1904), the School of Domestic Management (1905) and the Central Fire Station (1908). Having won widespread professional recognition, Lönn became the model for young women architects. 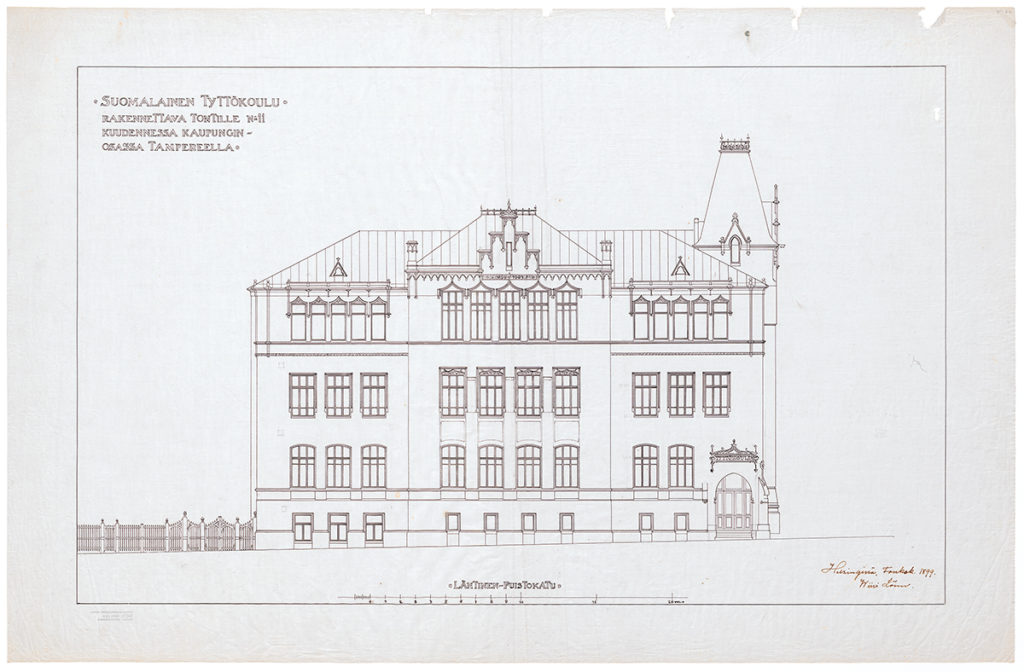 During World War II, in May 1942, a group of female architects convened to celebrate the 70th birthday of Lönn at architect Elsi Borg’s husband’s art studio at Lallukka Artists’ Home. By that time, as many as a hundred women architects had already graduated in Finland. The party resulted in the establishment of Architecta, the Finnish Association of Women Architects. It was the first association for women architects in the world. Aino Aalto gave a speech of such magnificence that it was rumoured that her husband Alvar, the doyen of Finnish architecture, might have helped in writing it.After Lönn’s birthday party, the women took action and the first official meeting of Architecta was held on 3 November 1942 at Hotel Seurahuone, where the windows were boarded up and secured with sandbags in anticipation of air raids. The first excursion took place only a couple of weeks later. The spring meeting of 1944, held at the Aaltos’ house, was special as it featured Professor J. S. Sirén, architect Olli Pöyry and, of course, the host himself, Alvar Aalto, as speakers. During the meeting Alvar Aalto said in a very loud voice to Wivi Lönn, who was sitting next to him, that he only ever had amorous adventures with women architects. Lönn replied without batting an eyelid by raising a glass and saying, “Let’s drink to that!”A wide and heated discussion ensued about the necessity of a separate club for women architects and its relationship with the Finnish Association of Architects. Many male architects could not see the point of having a separate association for women. “It is difficult to understand why a women’s association needs to be established. Are there matters that need to be kept away from men’s ears?” asked the architect Esko Suhonen.But even before Architecta, a group for “girl architects” had existed between 1919 and 1924, named Tumstocken–Tumstokki (Yardstick). The texts and drawings collected in the group’s journal told a colourful story of the daily lives and ideals of the students, as well as of architecture as seen through the eyes of young women. For example, the journal tells that in 1923, Salme Setälä “appeared for the first time at the meeting sporting a new haircut, a bob. The meeting decided unanimously that the hairstyle made her look younger and was most becoming. An initiative was proposed that all members would cut their hair.”

During World War II, Swedish colleagues assisted the members of Architecta by sending coffee and other goods. Nearly one third of Finland’s women architects left the country in the 1940s to work in Sweden; some left during the war to take their children to safety, while others moved after the war had ended. Many left alone to “obtain food and clothes for the children”, as one of the Architecta members said, reminiscing about her difficult decision to leave her children behind in Finland.Most of the Finnish women architects worked for the cooperative housing association HSB (Hyresgästernas sparkasse- och byggnadsförening) and the cooperative federation KF (Kooperativa Förbundet). They were assigned to demanding design tasks, such as residential buildings, schools and hospitals, which built up their professional expertise as well as their self-confidence. The women felt that they were being treated as equals, architects irrespective of their gender. On their return to Finland, they brought with them a host of new ideas. Thanks to the contacts made by its members while in Sweden, Architecta would later receive many visitors from abroad and arrange open lectures and training events.Combining work and family was one of the biggest challenges for women architects. The older members of Architecta have described what it felt like to have the passion to maintain their professional skills and to be left with too little time for their children. “I had to suppress my maternal feelings, as it were, if I was to keep up professionally,” one of them confessed.Women architects often sought public positions, which meant more regular office hours and better chances of reconciling work and family life. As early as in the 1920s and 1930s, the building office of the Ministry of Defence employed several women, including Elsi Borg, Märtha Lilius-Tallroth and Martta Martikainen-Ypyä. This type of career path was, however, less valued and the salaries lower than in private practice.
[caption id="attachment_4165" align="alignnone" width="618"] 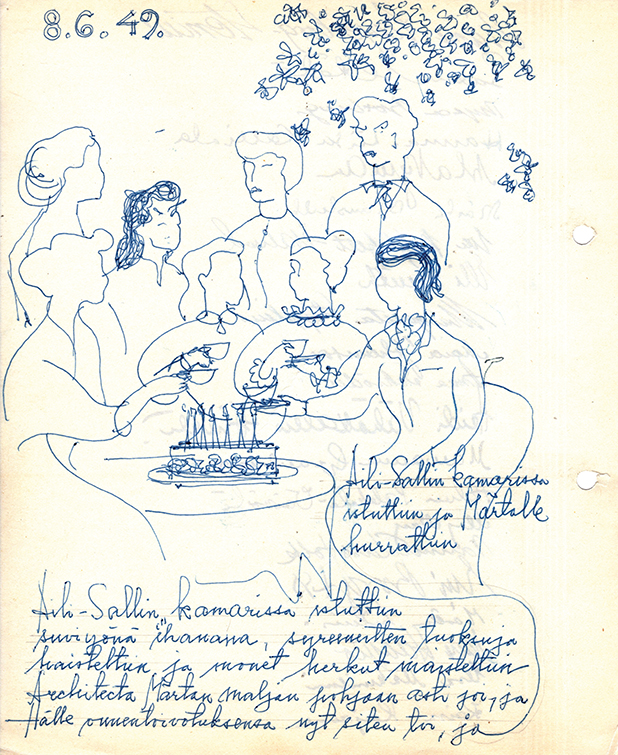 The world opens up

Excursions were from the very beginning one of Architecta’s main activities. First, for practical reasons, excursions were made to different parts of Finland, but in 1950 an excursion was made all the way to France. The Architectas were curious and spoke foreign languages well, and travelled far to participate in international events, such as CIAM and UIA conferences. Architecta sent a delegation in 1963 to the inaugural congress of L’Union Internationale des Femmes Architectes (UIFA), held in Paris, and in 1976 a group of eleven went to the spectacularly organised UIFA conference in Iran, hosted by Empress Farah.The talks, discussions, exhibition visits and excursions organised by Architecta have served both an educational and social purpose. In 1978, Architecta participated in the international Les femmes architectes exposent exhibition at the Centre Pompidou in Paris. Architecta marked its 40th anniversary in 1982 with an exhibition at Kunsthalle Helsinki, introducing the lives and works of early Finnish women architects; the exhibition later toured to other major cities in Finland. The Museum of Finnish Architecture curated its own exhibition based on the material, entitled Profiles. Pioneering Women Architects from Finland (1984), which also toured to several cities in Europe and the United States.
[caption id="attachment_4166" align="alignnone" width="618"]

“Profiles. Pioneering Women Architects from Finland” exhibition at the Museum of Finnish Architecture in 1984. photos: MFA and Pia Ilonen[/caption]
Architecta has continued to this day to organise excursions and lectures. Every other year since the 1980s the association has awarded a prize to a recently graduated female architect for a high-quality thesis. Today, more than a half of architectural students are women, and women architects successfully operate private practices and, in their capacity as professors, serve as the educators of the new generation of architects. Architecta continues to serve as a vital network for many.

The article was first published in Arkkitehti – Finnish Architectural Review 2/2017.