02.02.2014
In the comedy-drama Lost in Translation (Sofia Coppola, 2003), the main characters meet in Tokyo, but despite their apparent mutual attraction, the couple face intrinsic loneliness as they become to realise an irreconcilable difference between their life situations. The translatability of meanings seems to work more agreeably in architecture than in relationships. Museum of Finnish Architecture has taken an intriguing step to explore how far-off contemporary Finnish architecture is against the backdrop of Chinese culture and how it translates into the language of the far-east art market. The bipartite Re-Creation installation by Anssi Lassila and Teemu Hirvilammi at the Bi-City Biennale of Urbanism and Architecture in Shenzhen was completed in January 2014.The installation is composed of two small pavilion-like structures: one built in spruce logs by master carpenter Kari Virtanen (Nikari Oy) and his assistants; the other is created by Chinese designer Gigi Leung and master carpenter Richard So in bamboo. The actual installation is also supplemented by a video and photographic exhibition and a workshop about the process and methods. In this way, the whole project actually looks to be a triptych: a holistic programme about the fluctuating procedures of art-making. Everything is documented from the very first sketches from the pen of the master architect in Seinäjoki, Finland to the drops of sweat on the builder's forehead in Shenzhen, China.The basic idea is similar to what Lassila Hirvilammi architects presented in the New Nordic exhibition at Louisiana Art Museum, Copenhagen summer 2012. Based on Anssi Lassila's concept and curated by Juulia Kauste, director of MFA, the installation is a study about tradition in a new context: an examination of how the method and the material translate into something experimental, yet definite. What we get, is not duplicate, but two readings about the manner in which details, materials, craftsmanship, tectonics, situation, place and form affect one another and the character of space.As China has become an increasingly important market area also for Finnish architects, MFA's contribution to the Shenzhen Biennale is significant. Lassila Hirvilammi architects is an exciting office with a unique signature and a compelling ethos. In the Chinese context and as executed in Shenzhen, their trait of using traditional building methods echoes even more. The contrast – or rather, the comparison – between the Chinese interpretation and the Finnish one gives impressive freshness to the idea and deepen the usually somewhat introvert character of the Lassila Hirvilammi architects' pavilion vocabulary.The extreme perfection of the woodwork and the closed, den-like ambience of the spruce log construction leave little room to impose any eccentric meanings on the architectural form. Although situated in a breathtaking space of an old glass factory, the installation does not seem to comment on it directly, but only in conceptual terms. Rather, it quietly contemplates the roots of its own existence. It is as if the spruce log pavilion speaks strictly Finnish, and the bamboo structure is fluent in Chinese. The role left for the odd spectator is to pop in and sigh: 'Well, this is nice'. It may yet to be seen if such superficial response and such constrained behaviour on the part of the audience is enough for Anssi Lassila and Teemu Hirvilammi, or for Juulia Kauste from the Museum of Finnish Architecture. The next step will be taken in Venice Biennale 2014 where the same duo is reported to display the next version of the installation.[caption id="attachment_304" align="aligncenter" width="1200"] 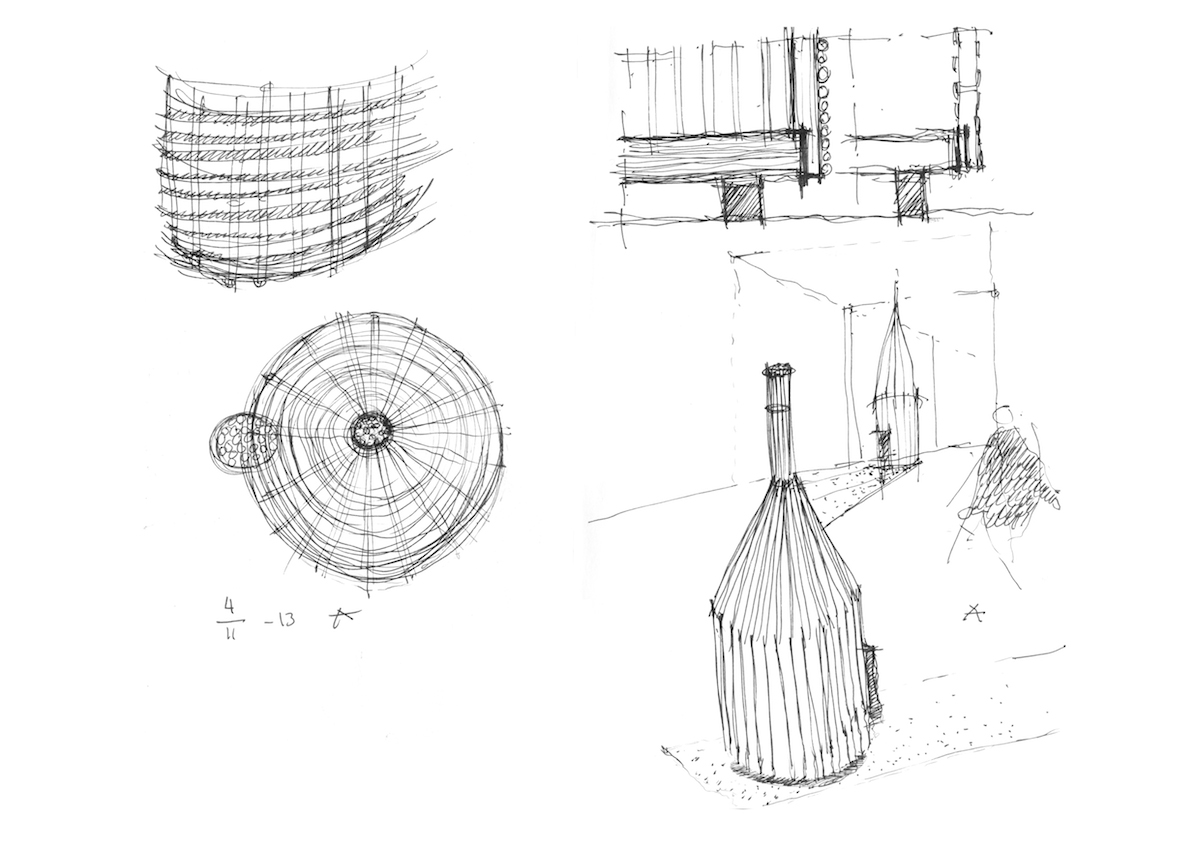 The making of the Finnish part

The making of the Chinese part