18.02.2014
Architecture critic Tarja Nurmi reviews House M-M designed by architect Tuomas Siitonen.[dropcap]T[/dropcap]he market for private houses and homes in Finland has for some time been overly dominated by so-called pre-fab or catalogue houses. Only a small percentage of private houses are designed specifically for an individual client or family, tailored for a certain site, and designed down to the finest details by a ”real” architect.The situation is almost the opposite in neighbouring Estonia, where since independence even mid-income families, especially in the Tallinn capital region, have turned to architects to design them an individual house. Here in Finland, many architects’ commissions for designing private houses –those leading to the best results – do indeed still come from quite ordinary people. They want a nice house and home but do not necessarily require spaces for big art collections and formal entertaining and dining. We do, of course, also have exquisite recent examples of meticulously designed villas for world-famous conductors and successful business people.There should actually be more politicking in favour of using trained and competent architects also for private commissions or joint housing projects. It’s only then that the actual benefits of the given site, the environment as a whole, and the wishes and requirements of a family or group of people can really be looked at in depth and taken into consideration. A private house commissioned from an architect need not be any more expensive than a semi-romantic ”McMansion”.A Helsinki-based family with two children commissioned a house of a comparatively modest size, along with an attached small apartment for a grandmother, from architect Tuomas Siitonen. Both parents work in the field of the performing arts, and the mother in the family was raised in the old blue wooden villa that still stands on the same plot of land.The house is Siitonen’s first ”real” building design. He has earlier worked in the office of his father, professor Tuomo Siitonen, and with Heikkinen-Komonen Architects. He has also been active outside standard architectural practice, working on strategies for temporary uses of buildings in Helsinki.

The house presented Siitonen with the opportunity to found his own office. The house, named M-M, has even made it to the biannual review exhibition of the Museum of Finnish Architecture as one of the best buildings designed by a Finnish architect in 2012–2013. In the exhibition, due to be held in the summer of 2014, the building will keep good company with a couple of other high-quality private houses. Considering that the exhibition will comprise only twenty selected works, it’s an excellent career debut.Tuomas Siitonen’s first sketch was, so his clients thought, even a bit too modest and ”careful”. They encouraged him to think in a more avant-gardist way, while still keeping it simple enough for their budget. The completed house is brave yet still very straight forward, as determined by its strict and geometrical shape. It has only around 145 square metres of living space, but doesn’t lack anything in regard to spatiality versus cosiness or simplicity versus domestic grandezza.The M-M house stands at the bottom of a granite rock slope. The old blue wooden villa, which dates from around a century ago, stands at the top of the plot. Siitonen and the family wanted to preserve the existing garden-cum-orchard between the old and new houses, hence choosing a place to build that is not the most optimal in relation to light and the cardinal directions. The problem was solved by the orientation of the new building, the shape of its roof and the distribution of spaces and window-openings inside.The lower or ground level of the house is somewhat like a basement. Next to the covered main entrance, above which is a terrace, is a handy space for bikes and skis. The entrance opens into rather modest spaces, a small entrance hall, a sauna-bathroom and a tiny dressing room that can also be used as a guest room. The dressing room has a door opening directly outside, thus allowing for the Finnish tradition of being able to go directly outside from the sauna, even in wintertime.At the other end of the ground floor is the small apartment for the grandmother, which includes her own terrace. Her apartment has been designed barrier free to suit an elderly person, with no bothersome thresholds and so forth. Siitonen has also created a separate sauna entrance, so that she can use it without disturbing the rest of the family, allowing her to take her own time.A staircase leads from the small entrance hall directly to the spacious living room and open kitchen above. The large space opens out through a generous window on to the elevated terrace, which in turn is protected by the long, upward soaring roof slab. There’s one fireplace facing into the living room and adjacent to it another facing the terrace – a nice bit of extra luxury for evenings with friends.The two children’s bedrooms on the same level as the kitchen and living room are rather small. They’re a bit nest-like, yet nevertheless well-designed spaces. It will later be possible to combine the children’s rooms into a single larger one by taking down the wall between them, and when that time comes the daughter in the family will move into the grandmother’s apartment.There’s a small, loft-like space above the kitchen, for music-making and watching films while lying on beanbags. The family did not want a flat-screen TV dominating the main living and dining space, which they have furnished in a very cool and familiar way. Behind this cosy loft space is the parents’ bedroom, which has a French window overlooking the surrounding semi-urban landscape and an old wooden military officers’ casino, also from about a century ago.There’s no impractical luxury in the house, but the materials have been carefully selected. There’s some kind of Aalto-inspiration in part of the spirit and detailing of the building. The house, with its different levels and surprising extra ”holes” and vistas and its homely yet contemporary atmosphere, also reminds me of the atmosphere in the old book Das Haus in der Sonne by Swedish artist Carl Larsson.Tuomas Siitonen admits that he has recently been charmed or intrigued by contemporary Japanese private houses and their ”three-dimensionality”. Also, while still a student of architecture, he took part in an international student exchange, studying in Madrid. There he had to learn to use rough working models. They have been more than useful in studying some of the clever little extras in this house.The external facades are clad in vertical larch boarding. The only dark interior space is the almost black sauna and shower room in charcoal black. The rest is in natural wood, though the interior walls are mostly white. The open kitchen has been custom built by an old friend of the family, a cabinetmaker who has conjured up beautiful cupboards in Nordic birch.The bottom line is that this is a home not a showpiece. A lot of the furniture is simple and recycled, yet stylish in a warm and familiar way. Judging by some of the details, for the artistic family this is a very fine, cosy and generously cool house to live in. And also a place where they can enjoy life together with family and friends.Text: Tarja Nurmi. English translation: Gareth Griffiths. Editor's note: The text has been previously published in Russian at Archi.ru: www.archi.ru/world/52687/finskii-dom. House M-M has been selected with an honourary mention in the Biennial Review of Finnish Architecture 2014 by the Museum of Finnish Architecture.[caption id="attachment_576" align="aligncenter" width="640"] 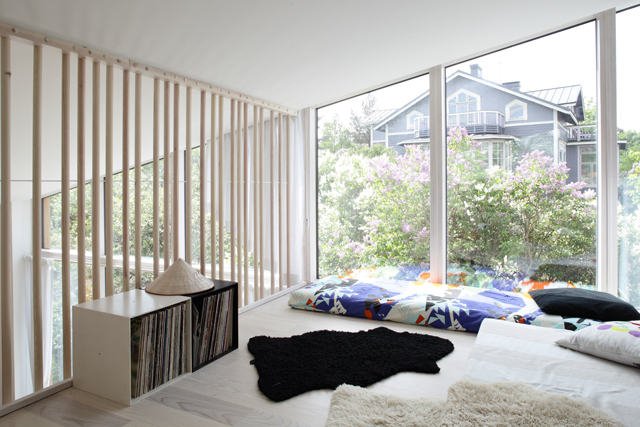 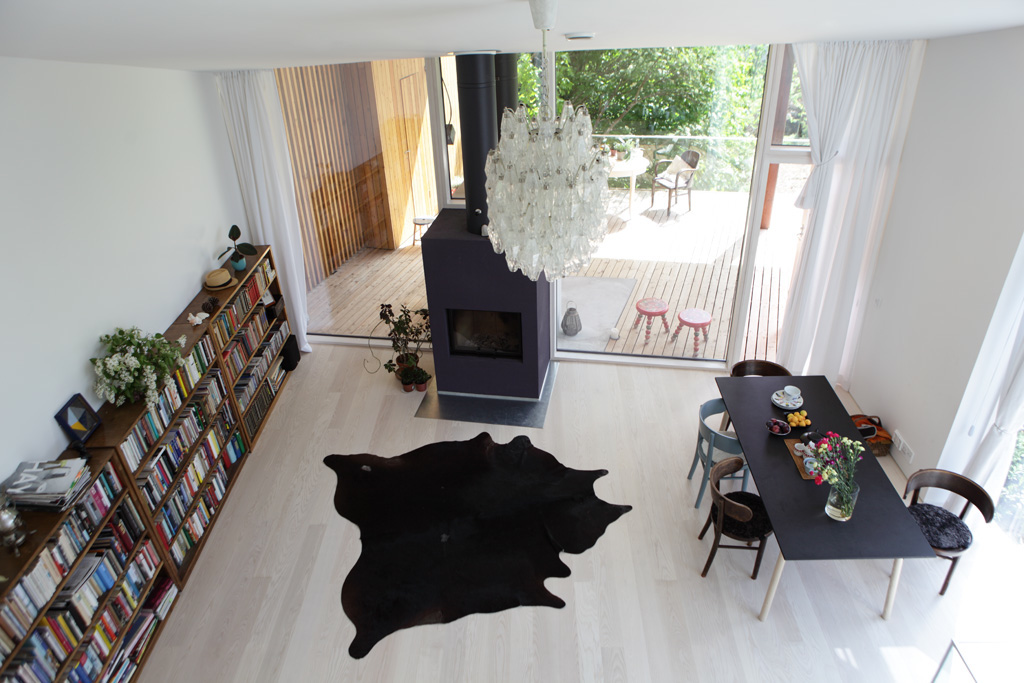 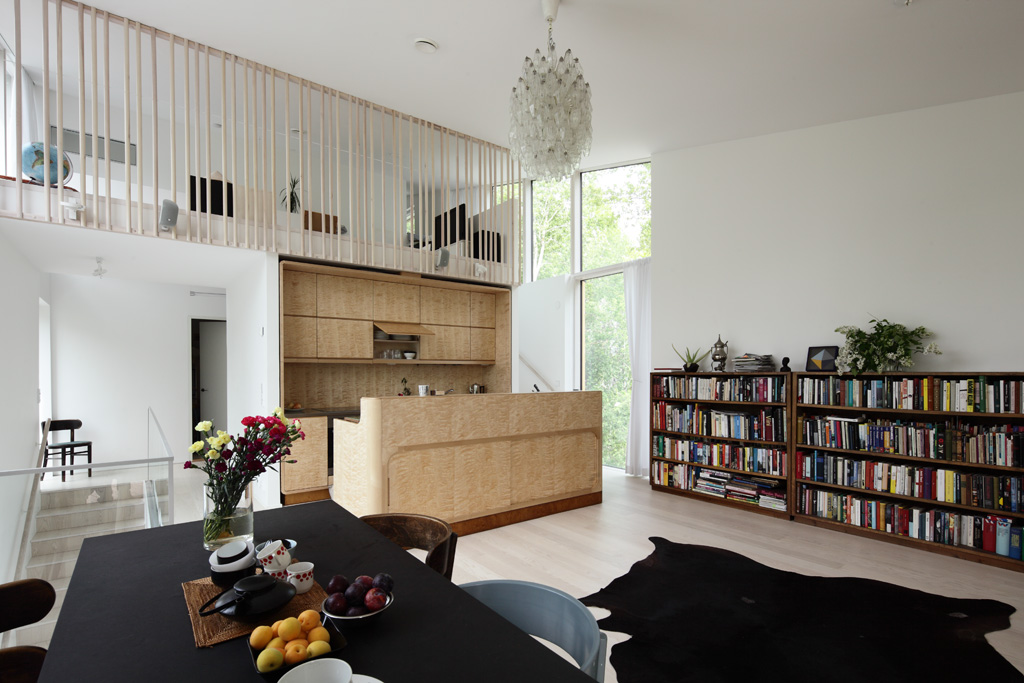 View the drawings of House M-M

Tarja Nurmi is a Helsinki-based architect SAFA, architecture writer and mediator. She has worked in architecture, design and research. She has also collaborated with Finnish National Television YLE and made TV programmes for YLE TV1 and TV2. Nurmi contributes regularly to the press and several professional publications both in Finland and abroad. She also organises events, curates exhibitions, and lectures about architecture. Nurmi's esteemed career in architectural journalism has been laurelled with both professional and national awards. Her most recent book is Finnish Architecture with an Edge (Maahenki, 2013).